The gateway to the Geirangerfjord, Alesund spans several islands that reach into the Atlantic Ocean. The town is known for its art nouveau architecture, which creates a setting that’s right out of a fairytale. Learn about this design style at the Art Nouveau Centre, or take a bus tour to see the spires, rounded turrets and ornamentation that adorn local buildings. Integrated into the coastal terrain, the Norwegian Aquarium has an underwater observatory, daily feeding demonstrations and an outdoor penguin park, while the Fisheries Museum, located in a warehouse built in 1861, features a laboratory that produces cod liver oil. Wildlife safaris transport you past seal colonies to the island of Runde, home to hundreds of thousands of puffins, shags, skuas, gannets and other sea birds during nesting season. For spectacular vistas of the city, ocean and surrounding Sunnmore Alps, ascend the 418 steps to the Aksla Viewpoint. 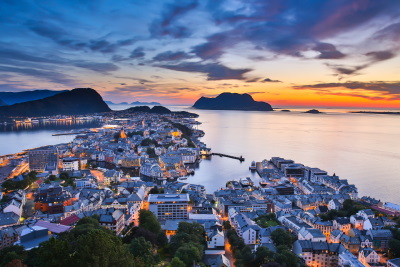