Norway’s second-largest city, Bergen is the gateway to the country’s mesmerizing fjords. Walking, Segway and double-decker bus tours bring you to Bryggen wharf, the 12th-century trade center that now is a UNESCO World Heritage Site. Explore the district’s shops, galleries and art studios, and visit the Hanseatic Museum to learn about the merchants who once lived and sold here. The city is surrounded by seven mountains, and a funicular railway ride to the top of the tallest peak, Mount Floyen, reveals postcard-worthy views. Other notable attractions include St. Mary’s Church, the town’s oldest structure; the seasonal fish market, with its fresh seafood, fruit and vegetables; the Bergenhus Fortress Museum, which highlights Norway’s role in World War II; and an aquarium, where you can observe sea lions, crocodiles and more. On a catamaran cruise to the picturesque Osterfjord and Mostraumen strait, sample ice-cold mountain water your captain captures from a waterfall. 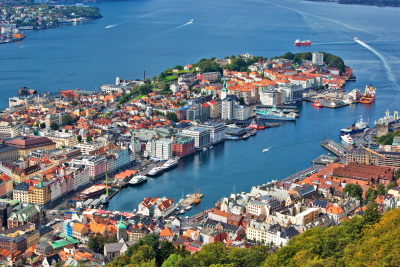