Aquatic fun and historic landmarks abound in Honolulu. At Waikiki Beach, enjoy activities ranging from sunbathing and surf lessons to diving adventures among sea turtles, dolphins and possibly humpback whales. Close by is Diamond Head Crater, where a hiking trail concludes amid mesmerizing views. Visitors of Pearl Harbor can see the USS Arizona, the vessel on which 1,177 crewmen perished on Dec. 7, 1941, and stand on the deck of the Battleship Missouri, where the U.S. accepted Japan's surrender to end World War II. Additional attractions include Iolani Palace, once the residence of Hawaiian monarchs, and the National Memorial Cemetery of the Pacific, the burial ground for more than 50,000 American service members. Excursions are available to Oahu’s North Shore; the island’s Windward Coast, a filming locale for the movie “Jurassic Park;” and the Dole Plantation, where you can sample freshly procured pineapple. 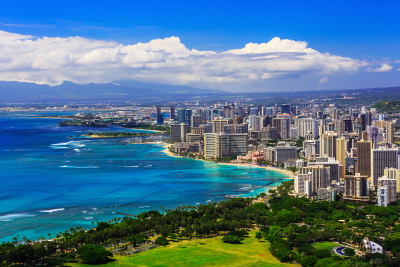 Language: English
Currency: US dollar (US$)

The Port of Honolulu at the Aloha Tower Marketplace is located about 5 miles from the Honolulu International Airport. Approximate travel time is 10-15 minutes. From the airport, turn right at North Nimitz Highway and travel 4.4 miles. Then, bear right at South Nimitz Highway and travel 0.2 miles. Turn right at Fort Street, then left at Aloha Tower Drive. There is no parking information available at this time.

Norwegian sailings will depart from the Pier 2 Cruise Terminal.

Call us at 800-338-4962 or inquire about a vacation here.
Open Mon-Fri 8am to 9pm, Sat-Sun 9am to 8pm, U.S. Central Time
Destinations For Cruises From Fort Lauderdale
Bahamas
Caribbean
Mexico
Panama Canal
South America