Charming beaches and promenades, preserved ancient architecture, and historical monuments, make Zadar a hidden gem of the Adriatic. Julius Caesar and Augustus influenced the urban architecture of aqueducts, forums, and temples surrounding the “old town” of medieval churches and monasteries. Standing tall with a massive domed rotunda, St. Donatus’ Church is known as the symbol of the city and holds some of the finest Dalmatian metal-works to date. Visit one of the many museums including the Archaeological Museum. With over 80, 000 exhibits from the Stone Age to the late Middle Ages, this museum is considered one of the most important in Croatia. The waters around Zadar are popular yachting sights, along with other water activities like sailing and windsurfing. Theatre and art are an important cultural facet, and performances are often held in its ancient structures, such as the traditional music evenings in St. Donatus. 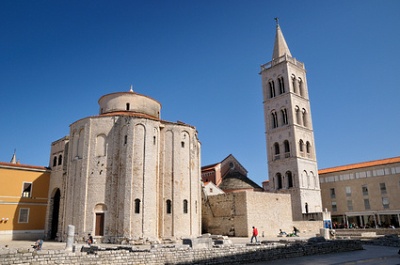